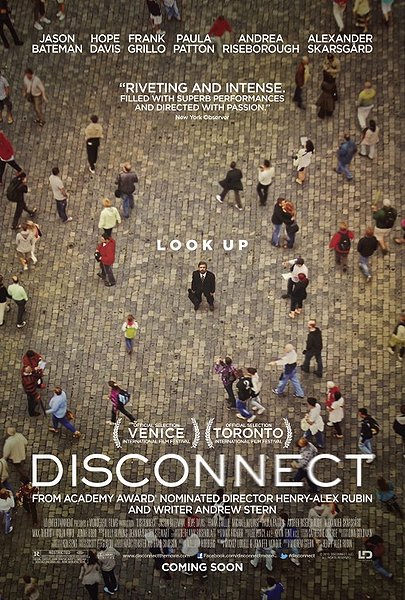 Perhaps watching Disconnect this past weekend have stimulated my thoughts and led me to the themes of the past few posts. After exploring the topic of happiness, I found it interesting of how the theme of happiness gradually lead me into a discussion of our current situation in this technological abyss. We are evidently the most tech-savy generation, and with every positive commendation comes degradation.

Even though the film lacked major theatre count and should have received greater recognition and nominations for awards, Disconnect only scored $1,436,900 at the box office and a 667 on Rotten Tomatoes.

Henry Alex Rubin’s Disconnect presents the topic of the “conflicts and relationships that are initiated through the use of laptops, ipads and smart phones. People fall in love, exploit one another, reveal their deepest secrets and even commit felonious acts.” Right off the bat, the title itself reflects on the ‘disconnect’ or lack of interaction between people due to their constant habits of using these devices. The film discusses a matter of the overuse of technology and although, it does not present anything new against this argument, Rubin pulls through with a well-manged film and strong performances from the entire cast. While managing to maintain a consistent disturbing and haunting edge, three interconnecting stories involving characters of different ages and gender are logically tangled together to provoke a thought on the films important and timely issues.

Despite having a strong thematic concept, the film lacked some sort of satisfying closure. A happy ending is not necessary in all films, but it seemed as if someone pressed pause when the film was wrapping up. I also found that the film was overly dependant on convicting technological devices, as the only culprit that separates people from one another. In my opinion, the web is not the only one at fault, people are equally responsible for hurting people. If we are as smart and tech-savy as we claim to be, shouldn’t we be equally aware of the dangers and consequences from our actions on the net.

This film was an engaging watch and it was successful in conveying a world of too much information and not enough communication. I’m not much of a rater, but if I would to give Disconnect a 3.5 / 5.